Writer selected for award – The Hindu

CHENNAI: Tamil writer A. Madhavan, who was inspired by the ideals of the Dravidian movement and the style of its writers, and combined it with naturalistic writing, has been selected for the first Vishnupuram Literary Award.

The award, worth Rs 50,000, instituted by Vishnupuram Literary Circle, will be presented to him by Malayalam novelist Punathil Kunjabdulla in Coimbatore on December 19.

Mr. Madhavan’s stories are all based in Chaalai, a commercial locality in Thiruvananthapuram.

Born and brought up in the Kerala capital, family circumstances forced him to quit school and go to work. Later he set up his own shop, Selvi Stores.

Sitting in his shop and watching the fight for survival unfold itself in Chaalai, Mr. Madhavan creates his stories in a distinct style and form. Whether it is human beings or animals, life is the same: a constant struggle.

“I am fully convinced that no one has contributed as much to the development of Tamil language as the Dravidian movement. But their politics is different,” says the writer whose short stories once published in the Pongal issue of Murasoli along with Anna, Chief Minister M. Karunanidhi and poet Kannadasan. 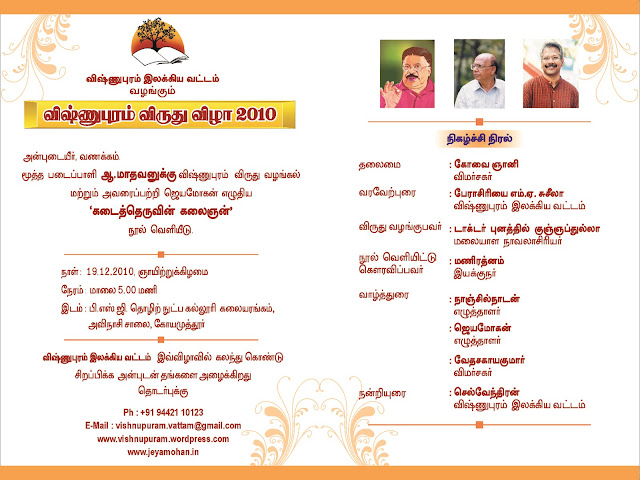